Donned with our Ren Fest garb, my daughter and I travel 78 miles to Gold Canyon on an adventure back in time (sorta). As we stood in line to enter, waiting patiently to walk through the gates of Fairhaven leaving the world of Mundania. The sound of a cannon finally signaled the opening of the 2022 Arizona Renaissance Festival. Passing through the portal, we were met with the smell of cooked turkey legs, the sounds of bagpipes, fiddles, singing, and various forms of revelry, dazzling all of our senses.

Two years ago, the Arizona Renaissance Festival shut down in the middle of its 2020 season, and never opened in 2021 due to concerns with covid. Finally on Feb 5, 2022, in its 34th season, the Arizona Renaissance Festival is back! Of course we went on opening day expecting a huge crowd, but we were pleasantly surprised to find it wasn’t nearly as busy as expected. For the most part this world felt back to normal, and while some still felt the need to wear a mask, most did not. Due to some of the challenges faced in 2022, there were certain food items that wasn’t available, but overall I was grateful that we barely felt any impact. Some of the shows modified their format, for example Ded Bob didn’t call up any Bob Zombies to the stage. While his comedy routine is amusing, that show was a painful reminder of the hardships we’d faced over the last two years.

We went a total of three times this year, which is actually kind of a low count by comparison. Each visit was very pleasant, but our last visit on March 19th it was a lot more crowded than the other two (it was also a lot hotter than the other two as well). I would say it’s definitely worth going early on in February because as March passes the temperatures do go up here in the desert. That being said, all of our favorite entertainers were there this year including Ded Bob, The Craic Show, Tartanic, Barely Balanced, and the Wyld Man show. The vendors were pleasant and fun to peruse, though prices were a bit outrageous (that’s to be expected). Food and tickets appeared to have gone up this year, but that’s not terribly surprising either considering.

The Renaissance Festival came to a close on Sunday April 3, 2022 and we are once again left with that feeling of sadness as they finish out their last day. Generally I like to go the last weekend as well, just to round things out, but this year that wasn’t in the cards. However, our sights are now set upon Phoenix Fan Fusion and deciding how we’re going to dress up for that glorious event!

If you’re ever in the neighborhood in 2023 in Feb or Mar, drop by Gold Canyon and visit the Arizona Renaissance Festival. 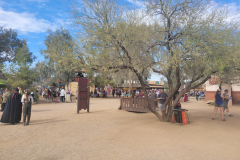